Question ALL THE THINGS

A few weeks ago I came across this piece in Harvard Business Review imploring companies to embrace questions like: “Why are we doing it this way? Is there a better approach?” For some reason – maybe just my usual end-of-semester frustration – this one really hit home with me. The essence, when you get right down to it, of being able to adapt to change, to constantly improve, to be the “best you can be, whee!” is to: 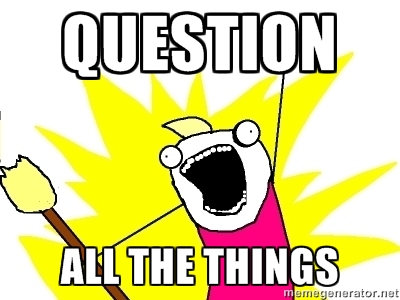 In journalism, even the most traditional of our institutions are all about “experimentation” these days as they seek to evolve and remain relevant and viable businesses:  the New York Times Innovation Report mentions this several times; Washington Post Executive Editor Marty Baron told all of us at ISOJ in Austin that it’s a major goal of his newsroom. Most experiments begin, fundamentally, with a question, and an atmosphere that welcomes it.

A willingness let go of:  “This is the way we’ve been doing things for 20 years — who are you to second-guess us?”

One might think the spirit of inquiry is endemic to the academic mission, but one would be wrong. Even as our sector, much like the media, stands ripe for disruption, I’ve never worked in another field in which one is more likely to see resistance to even the slightest threat to the status quo. An article in the New York Times today on G.M.’s years-long failure to fix a deadly safety issue in its cars described the “G.M. nod” – aka “the nod as an empty gesture.” While thankfully most of the issues I deal with don’t have life or death consequences, I’m often amazed by how questions are met with just that kind of passive resistance.

I use theories of organizational culture in my research, and I’m well aware of how defensive mechanisms get triggered and how and why resistance to change occurs. But I wonder if something as simple as encouraging people to always question how they could do things better  and rewarding them for doing so would be a great first step toward building an experimental culture.

In many ways, I think being able to question is also what allows us to be satisfied and feel our work has meaning. Instead of simply pointing out what we are doing wrong, bosses that encourage questioning such as “How could we do this better?”  are not only more supportive but produce the kind of atmosphere in which everyone is working collectively to come up with creative solutions to problems rather than just slinging the blame around. I find questioning invigorating and intellectually satisfying, personally, whereas when somebody just tells me something I do isn’t good enough, I get defensive and angry.

Entrepreneurs know this – this is why many tech startups are constantly engaging in A/B testing and other ways of answering their questions. For example, in his book,  The Lean Startup, Eric Ries talks about using the “Five Whys” to evolve processes. When confronted with a problem, he writes, ask “why” five times, and you will often uncover the root of the problem.

The Harvard Business Review piece points out it’s also no good to say to people who have asked a good question and uncovered a problem: Now it’s your job to fix it – without any new resources and in addition to your regular job. That will shut everybody down and create frustration real quick. People need time and space to question effectively.

George Carlin knew about questioning, too: